Lower percentage of the population is developing dementia

A global study, which was led by Erasmus MC in Rotterdam, shows that the incidence of dementia has declined by 13% in every decade over the past 25 years. The researchers followed more than 49.000 people aged 65 and older in Europe and the United States. Over 4.200 of the people being followed developed dementia, almost 9 percent. The incidence rate of dementia increased with age, similarly for women and men, ranging from about 4 per 1.000 person-years in individuals aged 65–69 years to 65 per 1.000 person-years for those aged 85–89 years. Incidence is similar for men and women, although declines across the decades were somewhat more profound in men. If taking these projections forward for the next 20 years, the authors estimate millions fewer people would develop dementia than current quoted projections of the global burden of disease (see graph). According to the authors, these observations call for sustained efforts to finding the causes for this decline, as well as determining their validity in geographically and ethnically diverse populations. 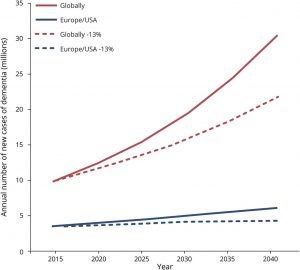